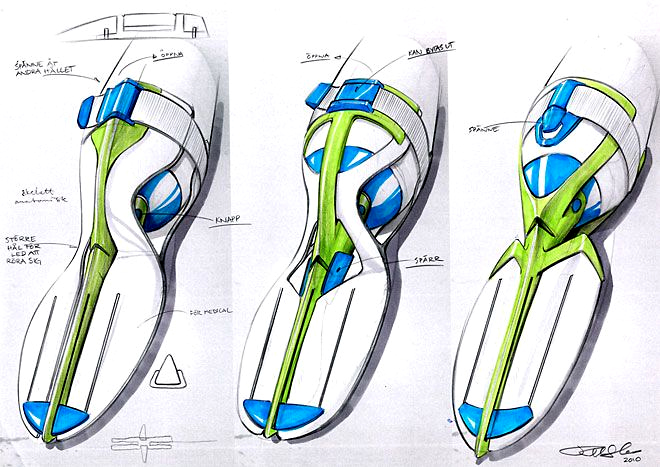 Richard Stark’s Neptune Fins are beautiful prosthetics designed for lower limb amputees longing to get back in the water. Recognizing the numerous health problems associated with lack of movement and the benefits of swimming, the young Swedish designer created a safe, practical, and environmentally harmless option that is perfect for the casual or serious swimmer. Unlike many prosthetics, these fins will give amputees a new lease on life without breaking the bank. Take a closer look at their amazing design after the jump.

Made out of non-toxic silicone, the green parts are soft and pliable, while the stiffer blue parts are made from easily recycled polypropylene. This combination of materials creates a comfortable prosthesis that won’t leach nastiness into the environment.

Also very durable and resistant to most chemicals and acids, the fins will last a long time and won’t need constant replacing. According to the folks at Wired, they are not yet covered by insurance, so Stark has to come up with a plan to reduce costs. Even so, at roughly $350, the current model is a worthwhile investment. 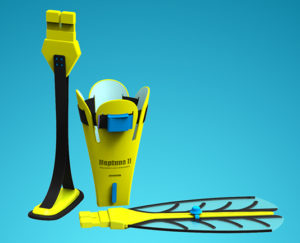 The Neptune II was developed as a redesign from a concept by student Richard Stark. The existing design was analized and then these observations where taken into account to take the concept a step further and refine the design. We took into account that many of today’s and tommorrow’s amputees may be a consequence of the obesity epidemic and its associated Diabetes Type II, which often results in lower limb amputations. That said, we tried to focus the redesign to aid this growing risk group and by doing so assit in their rehabilitation.

Amongst its improvements we transformed it into a modular device which allows the user to continue using it outside the water by just attatching the leg module. This allows for easy mobility to and from the water and also expands the range of possible uses of the device further than just swimming (showers, pools, ocean walks).

We tried to maintain most of the identity of the original concept, nevertheless we still worked on severeal areas of the product in order to maintain and/or improve its aesthetic, functional and physical value. The redesigned model allows for a more global solution for the amputee, increasing his/her social inclusion and overall wellbeing. 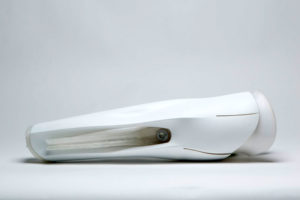 A functional prosthesis developed to aid trans-tibial amputees when swimming. It is digitally customisable and helps the amputee walk to the pool, dive in, and swim with recreated anthropometric symmetry that is lost due to an amputees imbalance in water.

A functional prosthesis developed to aid trans-tibial amputees when swimming. It is digitally customisable and helps the amputee walk to the pool, dive in, and swim with recreated anthropometric symmetry that is lost due to an amputees imbalance in water.

Your inspiration
The need for a swimming prosthesis was identified by the New Zealand Artificial Limb Service. A prosthesis that also allowed the user to get to, and into the water was identified by the researcher after observing the difficulties of an amputee getting to a pool. This project is a great example of a student working with real world partners to fulfil their needs whilst also innovating and developing the project beyond the initial brief. 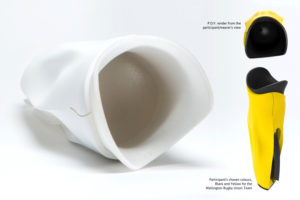 A digital system to and prosthesis prototype that uses a suction socket and flexible interior fin to help amputees swim, and a rigid sleeve that clips over the socket for walking to and from the pool. First the amputee’s limb is scanned using a handheld 3D scanner. Some manipulations are made for a good socket fit. This scan is then imported into a parametric CAD file that has custom built processes to take the geometry of the scan and construct the prosthesis around the amputee’s limb for the perfect fit. The first parameter the user/prosthetist decides is the thickness of the socket, with a 5mm default. Then the size, thickness, length and asymmetry of the fin can be adjusted to meet the users needs. Finally the exterior sleeve can be adjusted to the right height and to correct alignment. The file outputs a flexible fin and rigid socket for the interior fin and a rigid sleeve and soft grip for the exterior sleeve to be FDM 3D printed.

The design process was heavily human and user centred. Initially interviews and observation were undertaken to help me really understand what made swimming difficult as an amputee. This uncovered many details of the difficulty of not just swimming, but getting to, from and into a swimming pool. User testing was the most important tool for understanding the benefits and limitations of prototypes. As few examples of FDM printing of flexible materials exist large amounts of iterative testing were undertaken to refine this as a technique for fabrication. The amputee’s limb was 3D scanned by researchers and a prosthetist from the NZALS. This measurement was also compared using alginate casting and scanning the amputee’s walking socket. Prototyping relied heavily on sketches, card and clay modelling followed by CAD modelling and 3D printing. Hundreds of maquette models and test models were printed with 5 major prototypes being developed during the research. Prototypes helped resolve techniques used for measuring the limb, hydrodynamics, structure and walking and lastly the visual communication of the form and aesthetic details. 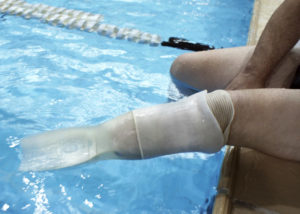 How it is different

Unlike previous swimming limb concepts, this is a fully functional prototype. It is rare that a master student concept overcomes all of the nuances and details of development and is ready to be tested by professional entities. This prosthesis has invigorated the user’s interest in swimming by giving back his independence and making time in the water a far more enjoyable experience. It uses anatomical referencing not to replace or «fix», but to enhance his experience, imbue pride and confidence in his body whilst helping those viewing the limb to understand the form and it’s purpose. It helps encourage him to keep fit by swimming which reduces the risk of cardiovascular disease, a major issue among amputees.

The prototype is ready to undergo prosthetist testing and further user testing with a larger group of amputee swimmers to help finalise default measurements, parametric ranges and fin customisation. With investment into a large format 3D printer the concept would be a viable, economical and sustainable product that can easily be customised to allow for confident and independent swimming by trans-tibial amputees.

Elle is a combination of a prosthetic leg and a swimwear that is designed to optimize amputee’s swimming experience by achieving balance, maximizing energy return from launch off and flip-turns, and supporting the body through the latest technology. Elle is geared to assist single-leg amputees to compete with able-bodied swimmers. Currently, elle is the only prosthetic that address the needs in swimming specifically.

Below are the challenges and how Elle solves it:
1. Balance — Amputees find it difficult to swim in streamlined position. A human leg has a specific volume and density which attributes to our balance; the loss of a leg will result in imbalanced buoyancy due to unequal upward water pressure between left and right side of the body. Elle leg provides an adjustable air chamber to control buoyancy and help amputees to maintain their streamlined position in the water. Elle’s frame will be personalized to match the volume of the amputee’s other leg. In addition, Elle swimwear is made out of woven elastane-nylon and polyurethane, a material that repels water to increase buoyancy.
2. Multifunction — There are 3 phases in a swimming competition: launching off, swimming, and flip turning. Each phase requires a different energy release profile. Elle leg has a flexed ankle made out of a metal plate to increase energy return, interchangeable to match an individual’s strength, and Elle swimwear has an elastic band on the back, which will helps users launch off with reduced energy loss.
3. Comfort — Since the leg will have to move both rapidly and regularly, it is important to ensure comfort by having a tight fit between the stump and the prosthetic. Elle leg comes with a vacuum socket that reduces pain and improves endurance. 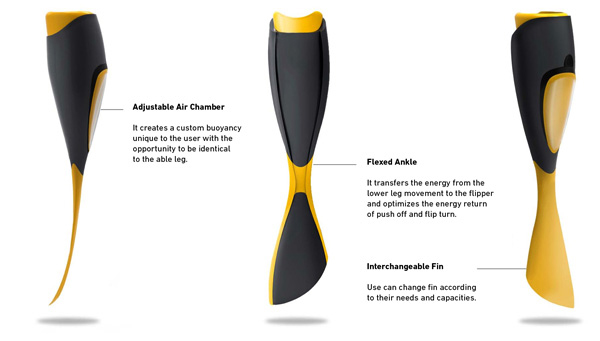